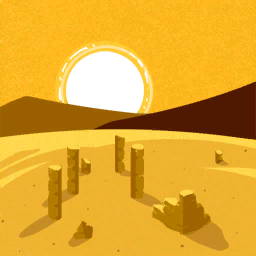 Miah is a repeatable Vault

There was a city here. We can pick over its remains like jackals over old bones: palace walls, buried roads, shattered fountains. Sometimes we may find the knowledge of the dead, and sometimes the dead may find us. [You've found all the Expeditions in the Sands, although you can find and visit Miah several times.]

The city, Miah, has long been sunk in the desert. Only ghosts walk its streets. Anything left there will be well-hidden. And the Vagabond's curse hangs over it all: her revenge on the place that wronged her so.

The wind of Miah is a pettish wind. It tugs at our garments like a needy child; it tosses sand in our faces; it whines among the dust-choked stones. The desolation of the city is not quite absolute. There are pillars, arches, sand-blinded statues, steps to nowhere.

We find relics in an abandoned chamber which might equally have been a cellar or a shrine. The walls are cracked and sand has poured through. When we return to the surface, the wind is rising. It almost tugs us from our feet. Perhaps it missed us.

It is randomly awarded for exploring Vagabond's Map (Secret Histories 12). -

It is always awarded for talking to Sulochana Amavasya about Vagabond's Map (Secret Histories 12).

Desolation - overcome with one of: Forge, Grail

A Hidden Door - overcome with one of: Knock, Lantern

The Fretful Dead - overcome with one of: Edge, Winter

The Creeping Breath Curse - overcome with one of: Grail, Heart

In Memory of Gods

The Songs of the Carapace Cross

The Manner in which the Alchemist was Spared

The Focus of Amber

The Sevenfold Slaying of the Seven-Coiled