'There is a light behind the world, a light above the Mansus, a light that penetrates both glass and skin. It is present here.'

- A Consciousness of Radiance 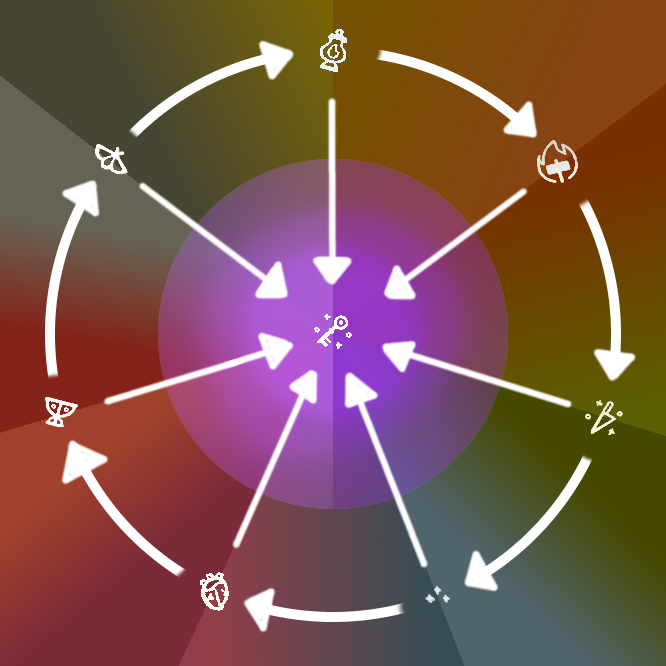 Principles, also known as Aspects, are the underlying powers of the world. Each embodies a complex set of symbols, concepts, and elements, and are present to some degree in almost everything in the Secret Histories universe, from the things most mundane to the highest mysteries of the Invisible World. Each of the Hours has influence over one or more Principles - but no more than three, in most cases.[1]

By aligning oneself to a specific principle, and with the support or patronage of an appropriate Hour, mortals can undergo a process to become an immortal Long. While their path of ascension may vary based on the presiding Hour, Long are categorized primarily by the aspect they invoked, which determines the details of their immortality and current form, such as how Lantern-long give up their physical bodies to dwell as spirits in the Mansus.

There are eight standard Principles: Lantern, Forge, Edge, Winter, Heart, Grail, Moth, and Knock. Secret Histories is often counted as a ninth Principle, though its status is intentionally ambiguous and often disputed due to its apparent difference - while all others can be described as "forces", or "drives", and have distinctive practices related to them, Secret Histories seem to exist only as theoretical knowledge.

Lantern is the Principle of the Glory, heavily associated with light, knowledge, and truth. It is heavily tied to the Gods-from-Light, though other Hours also embody some element of its power.[2]

Forge is the Principle of transformation and destruction, found in the applications of fire and the practice of alchemy.[3]

Edge is the Principle of conflict and struggle, of violence and victory. The Hours of Edge are locked in an internal struggle with one another known as the Corrivality.[4]

Winter is the Principle of death, memory, and silence. It is one of the aspects most closely tied to the dark, mysterious realm of Nowhere.[5]

Grail is the Principles of birth and blood, focused on temptation, desire, and hunger.[7]

Moth is the Principle of the Wood, wild and chaotic, erratic, and impulsive. It is another aspect close to Nowhere, which exists below the edges of the dark Wood.[8]

Knock is the Principle which Opens, associated with the uncovering of secrets and hidden things. It commonly acts as an intermediary aspect, connecting the Wake to the Mansus and overseeing all forms of passage.[9]

Secret Histories is unique among the Principles, focused on the study of the five Histories and their thousand demi-real branches.[10]

Many of the Principles appear tied to Apollonian and Dionysian concepts (the distinction is semi-official and never used within the game itself - but is used by AK). The Apollonian represents ideas such as logic, order, and reason, while the Dionysian is tied to instinct, chaos, and passion.[11] This can be seen in the structure of the Mansus, with the Glory at the top representing the “higher” pursuit of Apollonian ideals juxtaposed against the Wood, which embodies the Dionysian.[12]

Grail, Moth, and Heart are very clearly Dionysian Principles, focused on emotions, instinct, and primal urges. A number of Hours share some combination of these aspects and are almost all Hours of the Wood. They are also the Principles used in Cultist Simulator to upgrade Passion to the highest tier.[13]

Lantern and Forge are similarly very obviously Apollonian in nature. Lantern is the principle of the Glory, and Forge of Days herself is one of the original Gods-from-Light, with her aspect now shared with several Children of the Sun. Winter and Edge, while less obvious, also appear to be Apollonian in nature, and alongside Lantern and Forge are among the aspects used in Cultist Simulator to upgrade Reason to the highest Tier.[14]

Knock is often presented as being somehow transcendent or above the other Principles. All other principles subvert into it, and it is the only one that can be used in Cultist Simulator to upgrade both Reason and Passion. As such, it seems to exist outside of the Apollonian/Dionysian dichotomy.[15]

Secret Histories may be Apollonian in nature, as it is an aspect focused on knowledge and can also be used in Cultist Simulator to upgrade Reason. However, it’s special status among the Principles and limited representation among the Hours makes it difficult to be certain.[16]

It has been theorized that the Principles are not static forces that have existed always in their current form. The Gods-from-Stone, who have since passed, are implied to have governed different Principles that changed or split apart after the Lithomachy - for example, 'The Manner in which the Alchemist was Spared' uses the word "Flint" to quite clearly describe what is currently known as principle of the Forge.[17] This may also explain the shared themes and elements behind some of the current Principles, if they were previously combined under the reign of an old Hour.

Even “modern” Principles may not be immutable. The Corrivality that serves as the current focus of the Edge powers may not have existed before the rise of the Lionsmith to challenge the Colonel,[22] who until then would not have had a clear single enemy to battle against since the fall of the Seven-Coils some thousand years prior.