'Beyond the door, a winding stair lit by black nephrite lamps, and far below, the place called Nowhere where the Dead drift down, where nothing is exactly forgotten.'

Nowhere is a mysterious realm below the Mansus. It is described as very cold and dark, lit by lamps of black nephrite and filled with whispering voices. Many Hours guard against the forces of Nowhere to prevent them from entering the House and limiting their power.[1]

Doors to Nowhere can be opened by the Mare's Key, held by Rowena the Ligeian, though it may only be used with the best of intentions, and it never opens the same door twice. 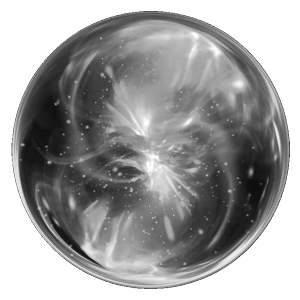 'They came from Nowhere, the warnings say, and if they complete their work, the Mansus will be Nowhere, one day'

Apart from the common Dead who drift ever downwards,[2] Nowhere is home to many perilous denizens, which pose an ever-present threat to the fabric of reality:

It is the resting place of the Dead Hours, the gods-from-stone who were slain during the Lithomachy and the Sun-in-Splendour after his division in the Intercalate.

But while these Hours are long past, they may still find their way back from Nowhere someday.[3]

In the corpses of these lost Hours breed Worms, those terrible creatures that seek to overrun the Wake and Mansus.[4]

And of course, there are the gods-from-Nowhere, the strange and malevolent gods which have always inhabited this dark realm.[5] The "real" Hours forbid interaction with the gods-from-Nowhere. Even still, the influence of these beings may creep up into the Wood and beyond on occasion, and some such as the Ring-Yew still commingle with them from time to time.[6] The known gods-from-Nowhere are the Crowned Growth, the Mare-in-the-Tree, the Applebright, the Rising Spider, and the Witness.

1. “Around 1890, in the Third History..." "I thank the Sun for the Horned Axe, the Black-Flax, the other older Hours..." 2. Death is Down 3. Read 'A Second Glory', 'The hearts of the false shall be taken from them when they cease; but the hearts of the true cease not.' 4. Watch-Worms, The Worm Museum 5. The Ecdysiast's Riddle Q: Did the first God-from-Nowhere appear before, after, or during the killing of the Gods-from-stone? A: Nowhere has always existed, and one quality of Nowhere is that it always contains the Gods-from-Nowhere. 6. Mare-in-the-Yew 7. The Elegiast's Price 8. Read 'Where Has She Gone?' 9. Read 'The Voyages of Ferninshun of Oreol'