'In the forest where the moon couldn't go, the boughs of the trees were woven together like bandages or lovers. The moon might change herself to an ant or to a bird or to her sister, but the forest would not yield to her penetrations, no matter her caresses. One day we came with our scissors, and we severed the branches until the moon and the blood dappled the rotting leaves on the forest floor.' 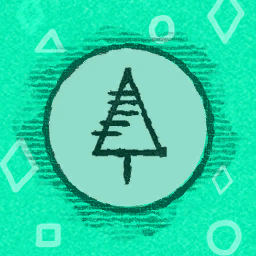 The Wood is the lowermost portion of the Mansus, lying outside the House Without Walls seemingly above the reaches of Nowhere.[1] Once, the Wood was was a vibrant land of vivid colors,[2] seemingly ruled by the old god-from-stone known as the Wheel.[3] Since the Lithomachy, the Wood has become dark, and as passion and reason contend in the human soul, so too does the light of the Glory with the shadows of the Wood.[4]

A realm of instinct and passion, the Wood is one of the parts of the Mansus most accessible to mortals, who may visit it in their dreams unaware of its true nature and learning to navigate its twisting paths more easily with limited knowledge of the occult. The Wood is also where all Dead initially go, and either lost and drift down to Nowhere, or proceed towards the White Door and into the House. This latter is the way the living follow too.[5]

A number of Hours dwell here rather than in the upper echelons of the House. The Moth, Velvet, and Ring-Yew are all Wood-Hours,[6] and there may be others such as the Witch-and-Sister and the Thunderskin who call the Wood home as well.[7]

The Wood is heavily associated with the Dionysian Principles of Moth, Grail, and Heart, and all of its denizen Hours possess these aspects in some combination.