'We call upon the Colonel, who is blind; who is scarred; who cannot be denied' [1]

The Colonel is a fierce, patient, and cunning Hour, who took part in the Lithomachy and helped open the Mansus to humanity. He was responsible for killing the god-from-stone known as the Seven-Coils, where he was blinded and scarred beforehand to make him impervious to the powers of that Hour. He was involved in the founding of Mycenae, and had a hand in the matters of both Greece and Rome. He was the teacher of the Lionsmith, and is hinted to also be his father. Since the Lionsmith shattered his sword and betrayed the Colonel at Issus, the two have been at war. The Colonel also serves as the guardian of the Worm Museum, and fights to preserve the status quo of the world and the Mansus.[2][3][4][5][6][7][8][9][10] His aspects are Edge[11], Winter[9] and Lantern[1][12]. His hour is 7 a.m. 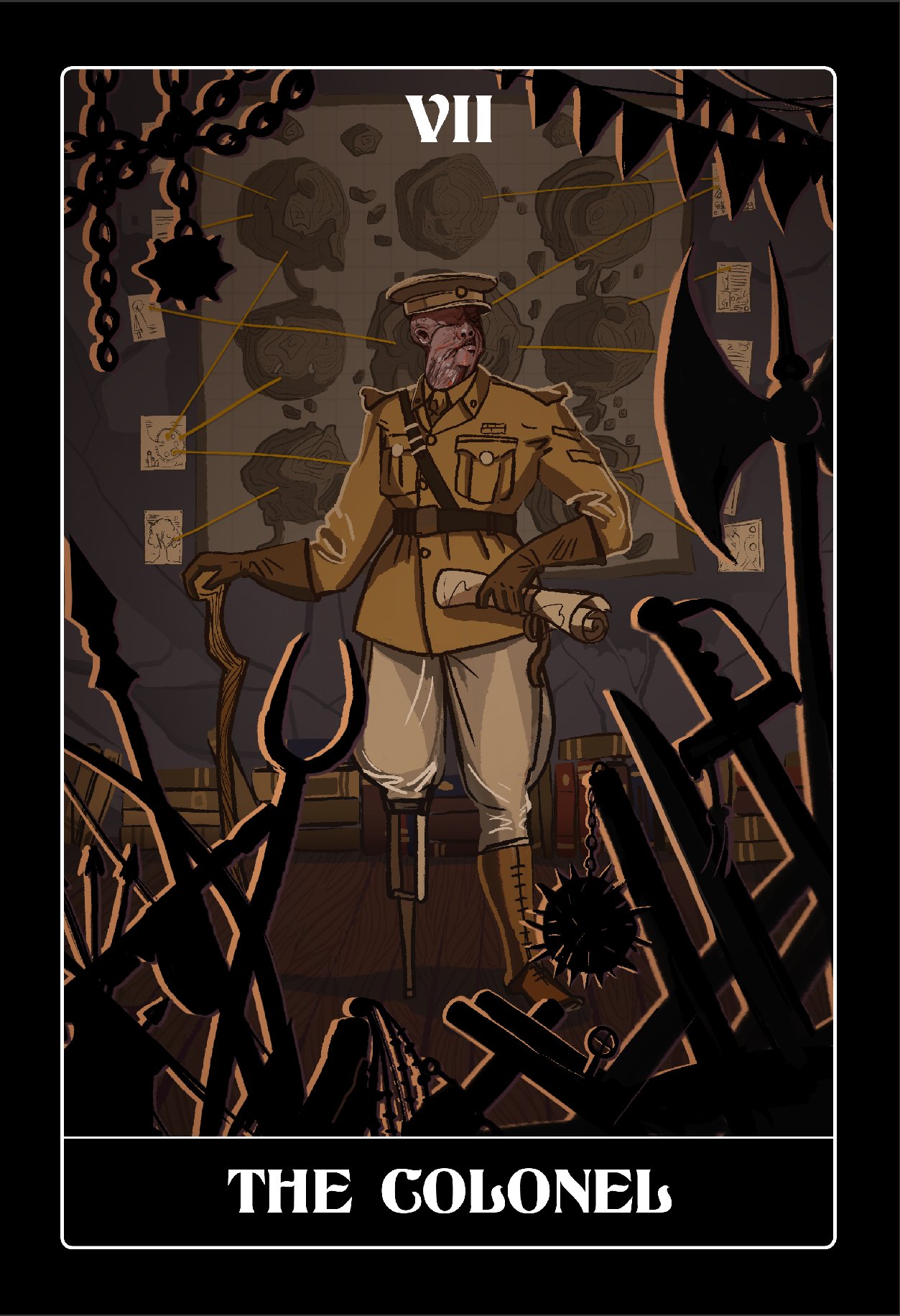 The Lithomachy: The Colonel had a key role in overthrowing the gods-from-Stone, slaying the Seven-Coils with the help of the Mother of Ants and entering the Mansus by force.[2]

The Colonel’s Descendants: The Colonel is often tied to the development and military activities of the Greco-Roman world. He is the founder Mycenae (the precursor civilization to the Greeks), was involved in the conquests of Alexander, and guided the Unnumbered Legion of Rome.[3][4][13]

The Training of the Golden General: A mortal from the Shadowless Empire traveled west to train under the Colonel. After seven years he returned to his homeland and became their Golden General.[5]

The Battle at Issus (333 BC): In one History, when Alexander led his armies to war with the Shadowless Kings, the Golden General refused to fight against his teacher’s descendants. But King Darius revealed to both the Golden General and Alexander “a secret of great betrayal.” The Golden General shattered his sword, and ascended to become the Hour known as the Lionsmith, locked in Corrivality with the Colonel, while Alexander ceased his conquest of Persia and returned to Macedonia.[5][13][14]

The Worm Museum: The Colonel has been charged by the Hours with the defence of the Worm Museum, which exists both within and without the Mansus. This duty is so important that even the Lionsmith does not challenge him there.[9]

1. We call upon the Colonel, who is blind We call upon the Colonel, who is scarred We call upon the Colonel, who cannot be denied 2. Read 'The Sevenfold Slaying of the Seven-Coiled' 3. Read 'The Deeds of the Scarred Captain' 4. Read 'Book of True Blood' 5. Read 'The Book of Thrones' 6. Read De Horis, vol 2 7. The Shahpur's Lesson 8. A Reunion 9. The Worm Museum, (influencewinterg) 10. The Colonel's Satisfaction 11. Edge 12. All three are also confirmed by Colonel's lore aspects in Exile 13. Read 'As The Sun His Course' 14. The Corrivality 15. Biedde's Blade and Biedde's Blade (Exile) 16. Biedde's Lesson 17. Make a Pilgrimage to an Iron Shrine, for a Revelation 18. An Operation of the Histid 19. Histid's Dart 20. Celebrate my Victory 21. An Operation of the Strix 22. Make a Pilgrimage to an Iron Shrine 23. The Dart in the Dark 24. The Victory of Crowns and Study the 'Victory of Crowns', by 'Arun' 25. Read 'The Account of Kanishk at the Spider's Door' 26. Call on the Cartographer of Scars to raise a corpse to half-life 27. The Concursum Diaries 28. Our Enemy's Identity, #diarist_unknown section 29. Lalla Chaima, the Huntress 30. Only the Best 31. Shrine: Colonel 32. Kinship 33. Arrange an Initial Meeting, #contact.retainer sections 34. Inquisitions for the Demiurge, Discord Follower Count Lore Snippets 35. The Scarred Mysteries 36. The Wounds of Wisdom 37. Read 'Medusa's Lament' 38. Imhullune Tectrix 39. Althiban Abyss 40. 'The Mother of Ants' 41.Quirinus 42. Chapel of St Andrew Stratelates 43. Fane of the One-Armed 44. Repurposed Datsan 45. Cellar Wotan 46. Mortal Shrine 47. Roadside Shrine to an Iron Saint 48. Scarred Lodge 49. Eternal Enmity 50. Crowkiss Hill, One More Treasure, Scarred Bone-Fragment, Furious Memory, The Colours Seven-Coiled