'This is only a stone, though it is smoothed and

sharpened to a midnight point, but look closer. Each

of its facets shows a single point of light. It might be

the glint of firelight. It might be each a different Star.'

The Flint was one of the old gods-from-stone worshipped before humanity and slain in the Lithomachy. It is described as a smooth stone sharpened to a midnight point, whose facets glint with light. It seems to have filled a similar role to the Forge, the Hour which killed it, as an Hour of fire and creation. The Flint is believed to be some some sort of proto-Forge, due to its connection to fire and “the arts of shaping and remaking”.[1][2][3][4] 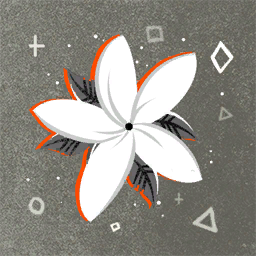 The Lithomachy: The Flint was killed and sent to Nowhere by the Forge, who “eclipsed and shattered” them.[2]

1. The Colours of the Old Fire 2. Read 'In Memory of Gods' 3. Read 'The World Does Not Weep' 4. Read 'The Manner in which the Alchemist was Spared' 5. Kinship 6. Antaeum 7. In the Antaeum 8. Arrange an Initial Meeting, (#contact.retainer) 9. Read 'The Songs of the Carapace Cross' 10. On the Smoky Satisfaction..., Enigma compilation 11. Secrets in the Soul 12. Feast upon a Remnant, (#spirit_forgee_edge.defunct and #memory.golden) 13. Golden Memory 14. The Vision of Flint 15. Read 'A Catalogue of Uncharted Pleasures' 16. Read 'The Morphy Codex' 17. Alchemy - the Operations of the Forge 18. When the Sun Might be Mistaken for the Moon