'We call upon the Horned-Axe:

when passage is to be permitted;

The Horned-Axe is the last of the gods-from-stone, the Hours who existed before humanity and were worshipped by the Carapace Cross. While the rest of them were slain in the Lithomachy, the Horned Axe remains as a liminal guardian of the Threshold. She is an Hour who separates and distinguishes, watching over the boundaries of the Mansus[2][3][4]. Her aspects are Knock[2] and Winter[5].[6] Her hour is 1 p.m. 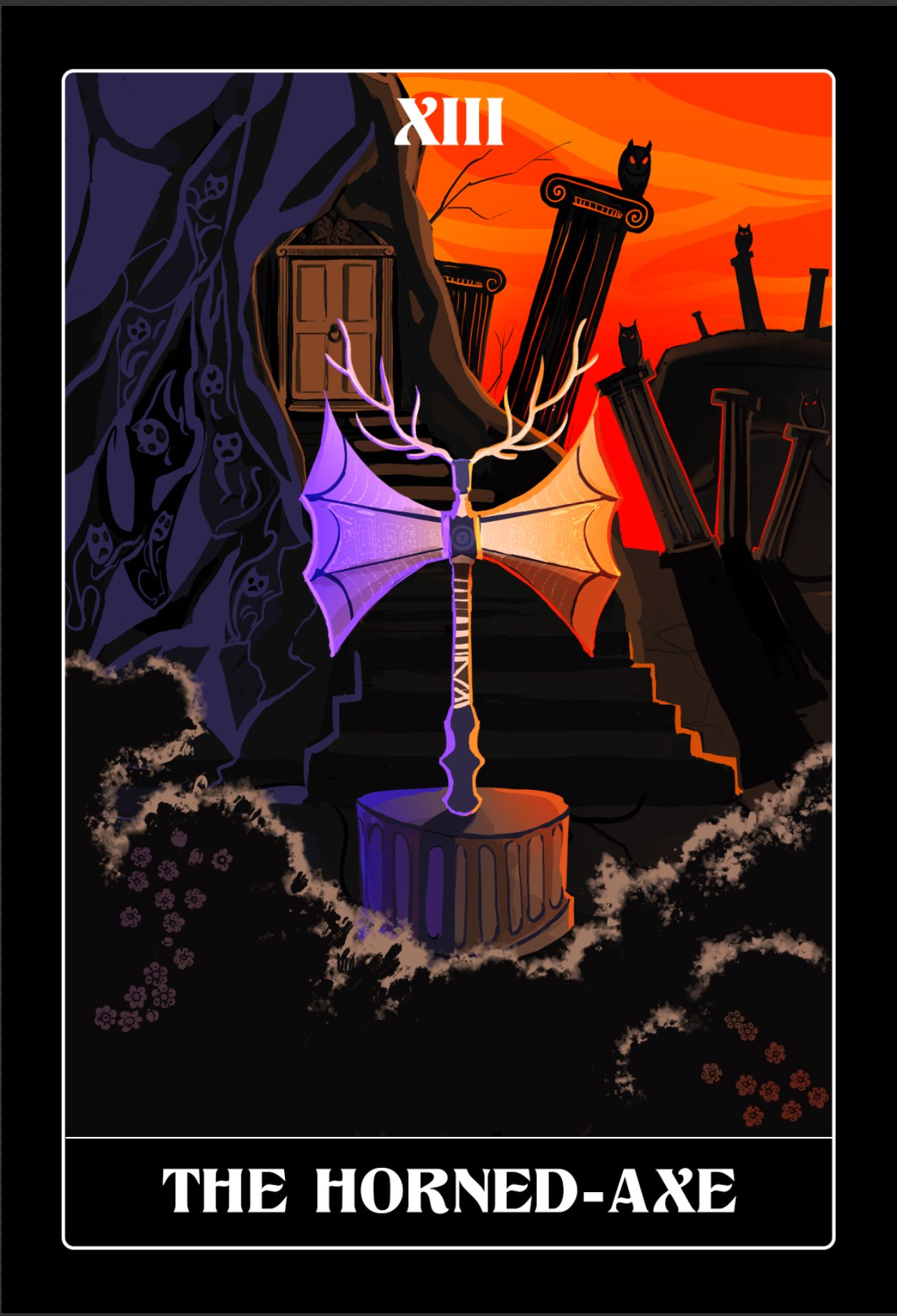 The Lithomachy: The Horned Axe’s fellow gods-from-stone were all killed in the Lithomachy, when the newer Hours usurped them and humanity forced its way into the Mansus. For whatever reason, the Horned Axe survived.[2][7]

The Flaying of the Thunderskin: After a time of likely hostility between the Horned Axe and the newer Hours, she came to an agreement with the Ring-Yew and the Red Grail. The Thunderskin, a Name of the Red Grail who loved the Yew, was sacrificed in an act presented as restitution for the deaths of the Horned Axe’s siblings. These Hours became those worshiped by the Sisterhood of the Knot.[8][9]

The War of the Roads (1450-1580): The Sisterhood of the Knot allied with the Church of the Unconquered Sun to repel the Children of the Leashed Flame, a group of English Long empowered by the Forge of Days. As an Hour of the Sisterhood, it is implied that the Horned Axe took part in the war.

The Intercalate (1582): The priestesses of the Red Grail prophesied the union of the Forge of Days with the Sun-in-Splendour, but those of the Ring-Yew and especially the Horned Axe included their own lamentations and warnings about the event.[10]

1. We call upon the Horned-Axe, who bears two blades We call upon the Horned-Axe, who permits passage when passage is to be permitted We call upon the Horned-Axe, who waits at the threshold 2. Liminal Evocation 3. Read 'The Songs of the Carapace Cross' 4. Exercise the Mind: A Brighter Illumination 5. Veneration: Winter 6. Both confirmed in Exile by The Horned Axe's Shadow and Divided Soul 7. Read 'A Second Glory' 8. Read 'The Morphy Codex' 9. Read 'Against the Sisterhood of the Knot and the Foulness of their Depraved Customs' 10. Read 'The Vinzant Inscriptions' 11. At the Stag Door, Again, Way: Through the Stag Door, This is Not the Answer, The Stag Door deck 12. On the Smoky Satisfaction..., Enigma compilation 13. The Temple of the Wheel 14. Heart 15. Study 'De Bellis Murorum', by 'Solipsistos' 16. "Around 1890, in the Third History, the Crowned Growth could be perceived through the White Door" "...I thank the Sun for the Horned-Axe, the Black-Flax, and the other older Hours. Without them I wonder whether we might not all be the Growth." 17. Visit the Fane of Owls, Candia-Heraklion 18. Lagun's End, One More Treasure, Long-Flake 19. Liminal Memory, The Colours of the Double Threshold 20. Secret Devotions 21. At the Fane of Owls