'We call upon the Ring-Yew,

who is succulent; who encompasses;

The Ring-Yew is an ‘old and fecund’ Hour of the Wood, whose domains includes desire, restlessness, and whimsy. She is one of the primary Hours worshipped by the Sisterhood of the Knot, along with the Red Grail and the Horned Axe, who sealed their pact with the sacrifice of the Thunderskin. She is known to have a forbidden relationship with one of the gods-from-Nowhere, the Mare-in-the-Tree.[2][3] Her aspects are Moth, Grail, Heart.[4] Her hour is 3 a.m. 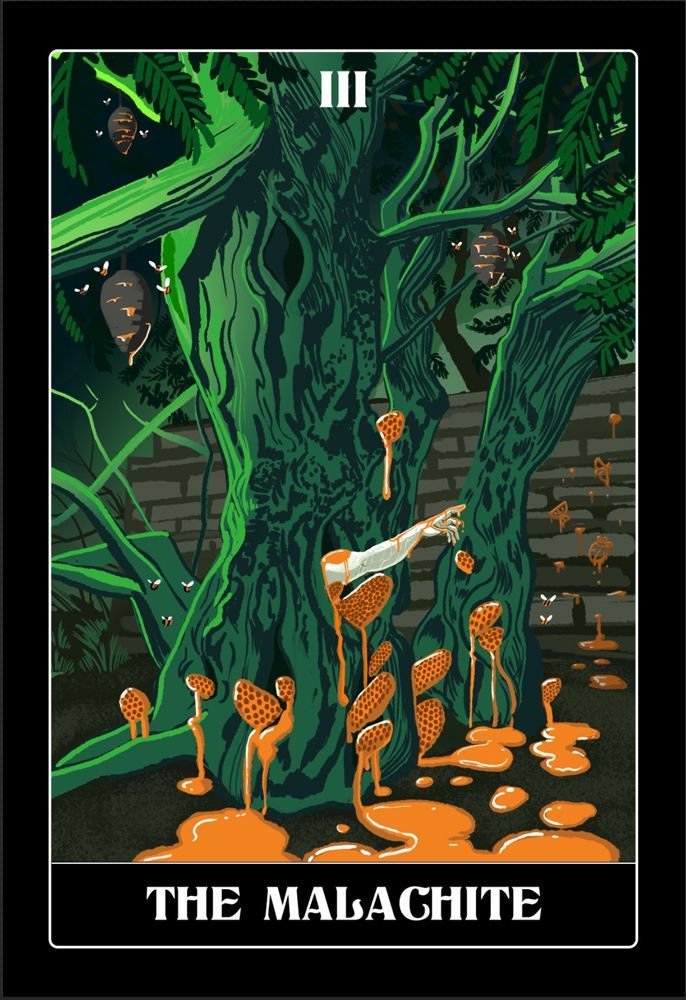 The Flaying of the Thunderskin: The Ring-Yew was one of the three Hours involved in the sacrifice of the Thunderskin. The Thunderskin was in love with the Yew, and was destroyed by the Red Grail as restitution for the death of the Horned Axe’s siblings, the other gods-from-Stone.[2]

The Timurid Invasion: The Ring-Yew was one of the Wood Hours that the Great Hooded Princes turned to to stop the invasion of a Timurid Army. While she initially refused, the Velvet helped the Princes blackmail the Wood Hours, and so the Ring-Yew destroyed a quarter of the army’s forces, who are devoured by bees”.[5]

The War of the Roads (1450-1580): The Sisterhood of the Knot and the Church of the Unconquered Sun both venerated the Ring-Yew, so she probably was involved.

The Intercalate (1582): The Grail-priestesses of the Sisterhood of the Knot prophesied the union of the Forge of Days and the Sun-in-Splendour, though the servants of the Ring-Yew and the Horned Axe both include their own warnings and laments about this event.[6]

1. We call upon the Ring-Yew, who is succulent We call upon the Ring-Yew, who encompasses We call upon the Ring-Yew, renewed 2. Read 'The Morphy Codex' 3. Mare-in-the-Yew 4. All those aspects are depicted on her Tarot image, written with honey on the right. Moth: 'Mare-in-the-Yew' and Burgeoning Risen aspects. Heart: Evocation by Heart followers. Direct Grail association comes solely from the Tarot. 5. Read 'The Fire-Circle Tantra' 6. Read 'The Vinzant Inscriptions' 7. Burgeoning Risen 8. Read 'Those Who Do Not Sleep' 9. Secret Devotions 10. Heart's Garments, Surrendered, Moth's Garments, Surrendered 11. Inquisitions for the Demiurge 12. "Is the Ring-Yew a God-from-Blood or God-from-Light? And is she single? She is actually a god-who-was-flesh, and as her powers are primarily deirse, restlessness and whimsy, you’re in with a good chance" Dappled Mask 13. The Velshorn Inscriptions