'We call upon the Meniscate,

from whom we do not turn,

whose beauty is unmatched' [1]

The Meniscate is one of the Solar Hours, created from the division of the Sun-in-Splendour by the Forge of Days. It was acknowledged even before that event as a Name, the Sun’s “night-self”. Her face is a wounded mirror, and she presides over the House of the Moon, the “shadow-self” of the Mansus. [2][3][4][5] Her aspects are Knock[6], Lantern[7] and Forge[8]. Her hour is 11 a.m. 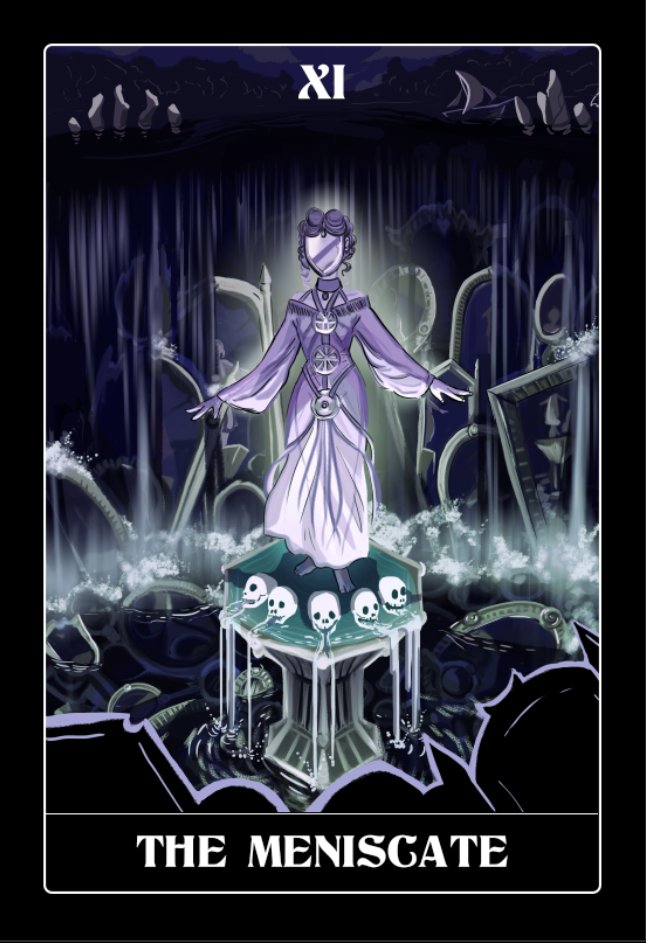 The Intercalate (1582): The Forge of Days was responsible for dividing the Sun-in-Splendour, who she loved. From the death of the Sun the Solar Hours emerged, among them the Meniscate.[10]

The Second Dawn: It is prophesied that some day the Sun-in-Splendour will return, and it is implied that the four children of the Sun will be consumed in the process, including the Meniscate.[2]

1. The Meniscate, who was once one of the Names of the Sun In Splendour... 2. Read 'The Time of Division' 3. Read 'The High Mysteries of the Innermost Chamber of our Church Solar' 4. Meniscate Invocation 5. IN THE HOUSE OF THE MOON 6. Mysteries of Opening 7. Illuminate Mysteries 8. Mysteries of Making 9. Read 'Sunset Passages' 10. Read 'The Book of the Extinguished Heart' 11. The Concursum Diaries, Our Enemy's Identity, #diarist_unknown section 12. Sunset Passages 13. Read 'How the End will Begin' 14. Kinship 15. Inquisitions for the Demiurge: What’s the relationship between the Witch-and-Sister and the Meniscate? Both possess heavy moon symbolism, so there must be something going on. The Church and the Sisterhood certainly thought so, although of course back then the Madrugad wasn't really an Hour as such. 16. 'The Wolf-Divided' 17. Read this volume of the Locksmith's Dream, Discuss the Locksmith's Dream, Volume 4 18. Explore an uncanny tangle of streets by the light of the moon. 19. Three 20. Xanthotic Essence 21. Glassfinger Toxin 22. Wounded Moon Lake 23. Chamber of Ways (fascination) 24. Orchard of Lights (glimmering) 25. Ascent of Knives deck (influencewintere) 26. Guise: Imago 27. On the White 28. Sunset at Noon 29. Dappled Mask