'We call upon the Thunderskin,

who cannot be stilled;

The Thunderskin is an Hour which "beats to protect the skin of the world". He was originally a musician who loved the Red Grail and ascended under her as a Name. He later came to love the Ring-Yew, and was flayed by the Red Grail as part of a treaty to placate the Horned Axe, as well as to help the Grail challenge the power of the Twins over the aspect of Heart. He ended up ascending to become an Hour through the Peacock Door, and now beats endlessly as a being of storms, dance, and eternity.[2][3][4] His aspect is Heart[5] and his hour is 4 a.m. 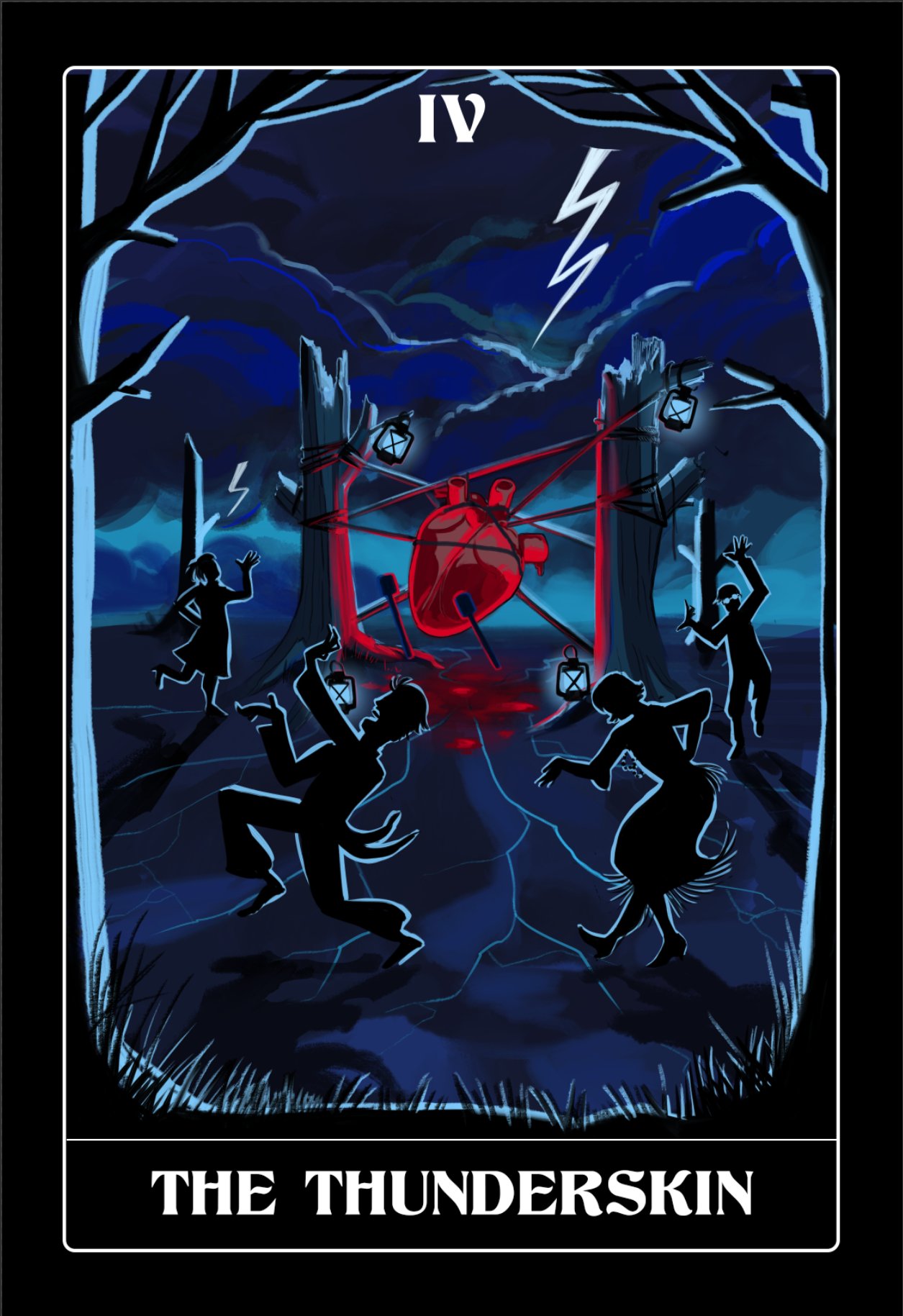 Ascension to a Name: There are several stories describing the Thunderskin as a mortal musician who followed the Red Grail and became one of her Names and lovers. He appears to have originated from Phrygia.[6][7]

The Flaying of the Thunderskin: The Thunderskin was sacrificed to seal the pact between the Red Grail, the Ring-Yew, and the Horned Axe, and is included alongside them as Hours honored by the Sisterhood of the Knot.[3][4]

1. The Thunderskin, the Heart Relentless 2. Heart 3. Read 'Against the Sisterhood of the Knot and the Foulness of their Depraved Customs' 4. Read 'The Morphy Codex' 5. Unceasing Mysteries 6. The Velshorn Inscriptions 7. Study 'Apollo and Marsyas' 8. Summon a creature of the Thunderskin 9. Read 'The Flayed Tantra' 10. Search for Something Unseen 11. At the Fane of Owls 12. Alakapurine Shears 13. Kingskin Bodhrán 14. Thigh-born Thorax-Sweet 15. True Blood of St Januarius 16. Read 'Those Who Do Not Sleep' 17. We call upon the Sister-and-Witch, who cannot be touched 18. Read this volume of the Orchid Transfigurations 19. Study the Skeleton Songs 20. The Rose of Nuriel, The Rose of Waznei, The Rose of Hypatia 21.The Last Dance 22. Januarius 23. Janus' Savour 24. LIFE, UNENDING 25. Duende Midnight 26. The Feast of the Heart's Remembrance 27. The Vision of the Pines 28. Scholar: Phrygian 29. Secret Devotions 30. A quicker way to the Seventh Mark? 31. The Lodge of the Sage Knight 32. 'Got Your Book...'