'We call upon the Vagabond, who tells her tale to the willing and the unwilling; who

cannot be stayed; who cannot be exhausted' [1]

The Vagabond is a rogue Hour, barred from entering the Mansus for a future act. She wanders everywhere else though, even Nowhere, and claims knowledge of all the Histories. It is said that she will be the first of the Pilgrims to ascend even higher in the shadow of the Watchman, perhaps to herald the Second Dawn and the return of the Sun-in-Splendour, which she knew.[2][3][4] Her aspects are Moth[1] and Secret Histories[5] and her hour is 5 p.m. 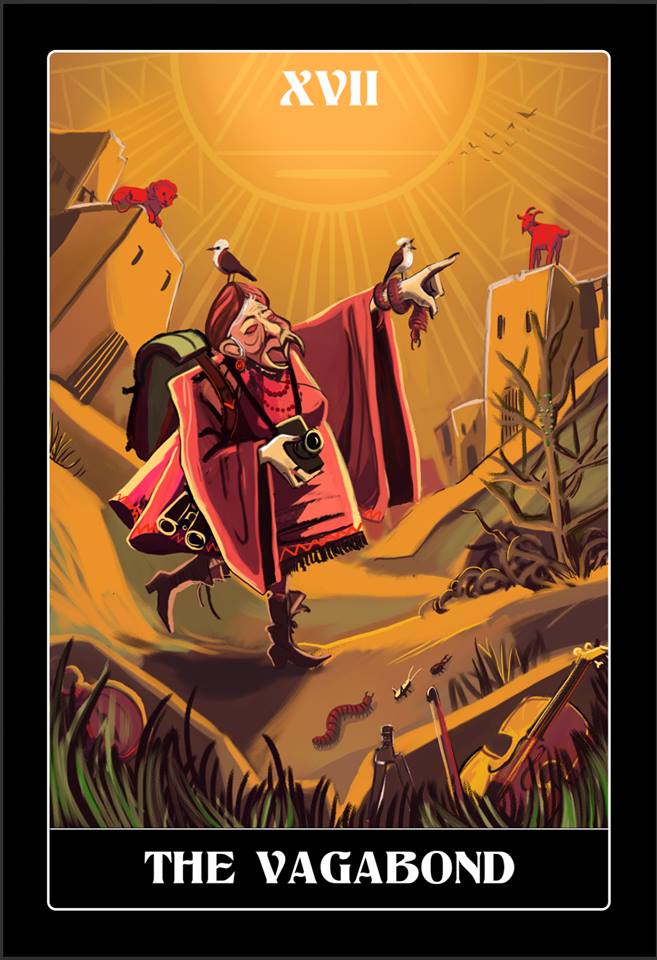 The Curse of Miah: The Vagabond was once a mortal from the city of Miah, punished for sneaking into the temple precinct. As an Hour, she placed a curse upon her homeland, which sank into the desert. Even today that curse still clings to the ruins.[6][7][8]

The Painted River: The Vagabond was responsible for painting the River in the Mansus, through which the Twins entered upon drowning themselves.[9][10]

The House of Lethe: Later known as the Ordo Limiae, and later still as the Fraternity of the Obliviates, the House of Lethe were a group of Long who hid themselves from the world and stayed out of the affairs of the Hours. One story of their founding describes a group of travellers gathered in a wood by the Centipede and abandoned. Beset by monsters, they survive by drinking from streams which cause them to go unnoticed, a technique that is still used by the Long of Port Noon to be forgotten by the world.[11][12]

The Roost: The Vagabond is among the Hours who take the shape of a bird to meet at a secret location called the Roost. There, they share rumours and gossip with one another, though they look unkindly upon mortals who overhear them. The location of the Roost changes upon discovery, but was originally in Miah, and later hidden in the mountains north of Gordion. She uses the form of a laughing thrush, but also has a connection to eagles.[13][14]

The War of the Roads (1450-1580): At some point an alliance was made with the Vagabond, likely on the side of the Sisterhood and the Church due to her friendship with the Sun-in-Splendour.

The Pilgrimage: The Vagabond is the first of the Seven who will ascend further as part of the Pilgrimage, likely to bring about the Second Dawn.[15][16]

1. We call upon the Laughingthrush, who tells her tale to the willing and the unwilling We call upon the Laughingthrush, who cannot be stayed We call upon the Laughingthrush, who cannot be exhausted 2. Read 'Where Has She Gone?' 3. Read 'The Book of Masks' 4. Vagabond's Map 5. Spreadsheet screenshot, The message, and a few messages later: "The Hour it refers to is not the Moth itself" (hence the only Hour it could refer is the Vagabond) 6. Read 'The Book of the Centipede' 7. Beginning an Expedition: Miah 8. The City No More 9. The Painted River (fragmentsecrethistoriesd) 10. Read 'The Larquebine Codex' 11. Read 'The Serenity of the Black Wood' 12. Port Noon Anecdote 13. Read 'The Book of the White Cat', Inaam, Kapigiginlupir, Garkie, Cryppys, Read 'In The Mountains As Upon The Plain...' 14. Guise: Eagle 15. Read 'The Time of Division' 16. THE INCURSUS 17. Summon the mysterious Name known as the Baldomerian 18. Rite of the Map's Edge 19. Read 'On Matthias and the Amethyst Imago: Loss' 20. A Dance with the Vagabond and Sight, Surrendered (Heart) 21. A Dance with Centipede and Sight, Surrendered (Moth)