The Places of Dream in Cultist Simulator 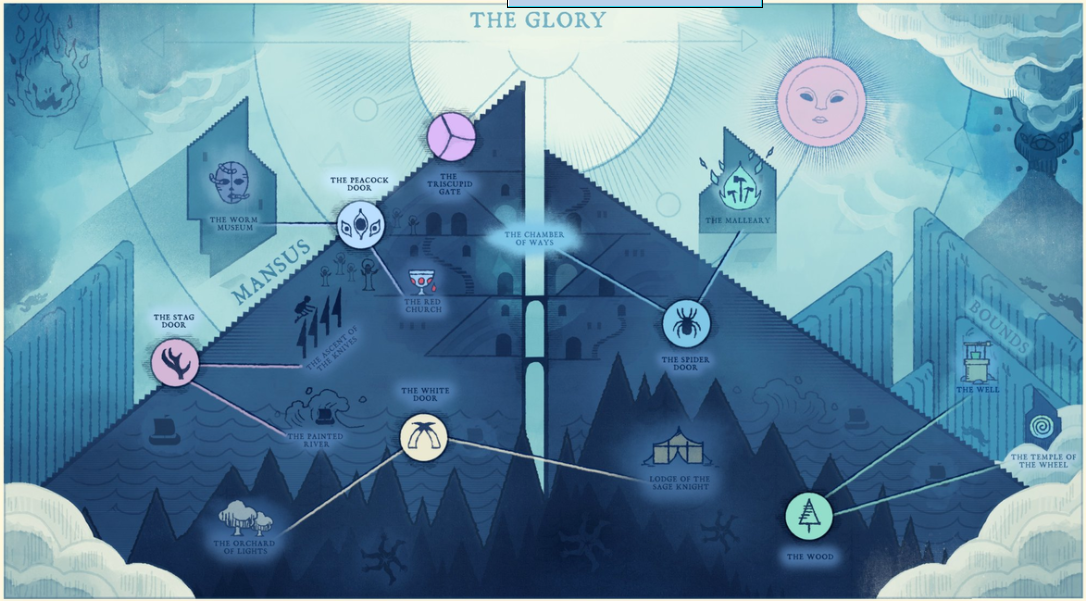 'The Wood lies outside the walls of the Mansus. As any student of Histories knows, the Mansus has no walls.'

The Mansus is the invisible realm of the Secret Histories Universe, where the Hours reign and influence our own reality, the Wake. It is divided into several different sections with various landmarks and locals. While the Mansus has no walls, there are various Doors which must be passed to access each region of the dream realm, some of which have more specialized purposes as well...[1]

It should be noted that the term "Mansus" is used both in reference to the invisible realm as a whole and to a specific region, also known as the House of the Sun, where a majority of the Hours reside.

The important regions of that realm include:

The Bounds are the borderlands of the Mansus, a sprawling maze of gray smoke and mist. They lie between the Wood and the House proper, though they may serve as a boundary encompassing the dream realm as a whole.

The Wood envelops the walls of the Mansus, though the Mansus has no walls. It is a dark, primeval realm of passion and chaos, where the principle of the Moth is strongest.

The House of the Sun proper is the primary domain of the Hours, where the majority of them reside and influence reality. It includes many gates and localities including:

The Glory is the apex of the House of the Sun, an ultimate source of Light and enlightenment. It is the peak of the Lantern principle, and perhaps the Apollonian aspects in general. It is also the origin point of the first gods-from-Light, the Sun-in-Splendour and the Forge of Days.

Nowhere is the dark and unknowable land that serves as the resting place of the dead, and the home of dangerous beings such as Worms and the gods-from-Nowhere.